Once there were a group of men – a young hot-blooded guy and a large number of old folks, doing timber job in a jungle (i.e. chopping down trees).

One day, one of the old folk invited him for a drink during their break time. That young guy refused and said he had no extra time to spend! Then the old man smiled to him and said “It was just a waste of effort to keep chopping trees without re-sharpening your knife. Sooner or
later you will give up or be exhausted as you have spent too much energy.” Suddenly the young man realized that actually during break times while those old folks were having a chat, they were also re-sharpening their knife at the same time! And that’s how they could chop faster than him and yet spend lesser time! The old man said “What we need is efficiency by making use of our skill and ability in an intelligent way. Only then can we have more time to do other things. Otherwise you will always keep saying, I have no time!”

The moral of the story: – Sharpen your skills at regular intervals. Take breaks, analyze the situation with a calm mind and re-think on better ways to get your work done. 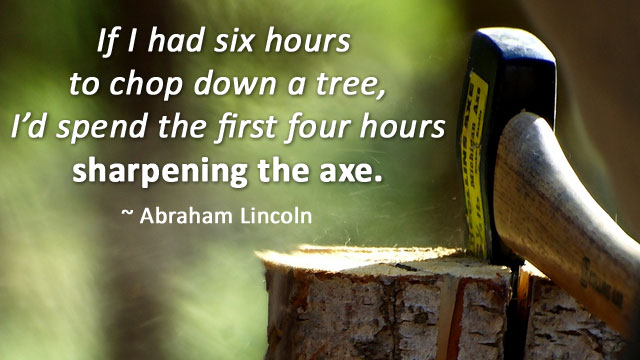 Do you have a lesson to share? We would love to know.