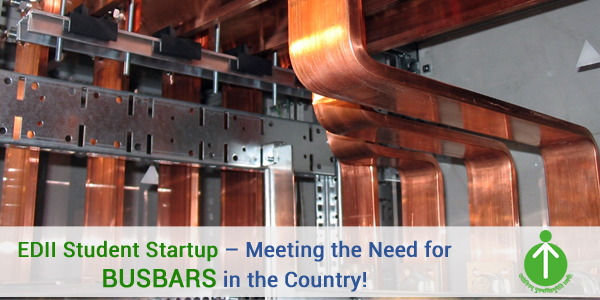 Startups are fast beginning to make a name for themselves across the country with all that they are achieving. It wasn’t long ago that a new startup, started by our student Rishabh Hundia which aims at meeting a production gap for busbars, took its first steps into the world.

The Inspiration behind the Idea

The idea that laid the foundation for the emergence of Bus bar Manufacturing arose when the Rishabh Hundia was attending a ‘Make in India’ conference. It was at that same moment that the student’s father advised him to look at the copper bus bar market and see if that line of business appealed to him.

Belonging to a family that has been in the metal industry for the last four decades, Rishabh Hundia has always been around metals and had grown up with the desire to work with them. This was what gave birth to a love and attraction towards metals, right from a young age. This was how the first seeds of a Bus bar manufacturing startup came to be planted in his young, innovative mind.

The way a bus bar works is that it conducts electricity within various heavy electrical appliances. It is also used for switchboards, substations or distribution boards. Copper busbars are very useful for power grids as they help bring down the power loss substantially. They are used to conduct a substantial current of electricity but the amount of current that can be carried in them depends on the composition of material used and the cross-sectional size of the busbar.

However, the current condition of the metal industry as a whole is not at a very good place, on both the national front as well as the international front. So given that the industry is in a difficult situation, right now this young entrepreneur is working on learning about the situation in the country so that he can come up with a good plan of revival. If all goes well, the future for copper busbars is likely to be bright.

The Future of This Startup

By trying to stick to the ‘Make in India’ policy, wherein the Government focuses on setting up manufacturing units in India, there is certainly a lot of potential for this company to grow. There will certainly be a lot of demand for the product by new manufacturing units that will require it for electrification purposes.

However, currently copper busbars are being imported in thousands of tons into the country and since 2010, the demand for them has been growing at 11 percent every year.

How Has EDII Aided the Growth of this Startup?

EDII has been a learning ground that provided mentors and the right faculty to bring Rishabh Hundia’s idea to fruition. Not only do they strive to turn students into entrepreneurs but they also provide entrepreneurial experiences in different sectors.

After EDII scrutinized the student’s DPR and once it had received the stamp of approval by various industry experts and learned faculty, it gave this young entrepreneur the confidence he needed to venture out and put his idea to the test.

Many students that have passed out of EDII has testified to say that the institution does provide the best faculty and mentors who help students turn their ideas into a reality and this was what was responsible for Busbar Manufacturing becoming a reality and one with a bright future awaiting it. What’s more, EDII also provide the much needed seed capital to its deserving students to help their start-up idea see the light of the day.