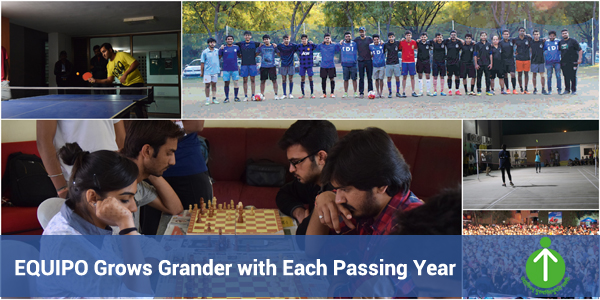 Frosty December chill evaporated for three whole days when large number of athletes from different colleges of Gujarat gathered at EDII campus to take part in interollegiate sports extravaganza, Equipo. The sports event was organized by the Students Welfare Committee of EDII during 17th to 19th December in the year 2015. The event saw overwhelming participation from colleges from leading cities of Gujarat like Ahmedabad, Gandhinagar, Surat, Vadodara and Bhuj.

The event included both indoor and outdoor games. Outdoor games like cricket, football, lawn tennis, basketball and volleyball received wholehearted participation from the athletes. Indoor games such as table tennis and chess too were received well by the contestants.

EDII students made their mark in all the sports but in badminton and table tennis (girls), they delivered extraordinary performances and won medals. Adani and SPM were runners up in these games. PDPU students delivered commendable performance and secured the first position in volleyball, basketball and lawn tennis (boys). NIRMA won the table tennis (boys) tournament whereas IRMA stood number one in Chess. LDRP was announced champion in Cricket. EDII students stood as runners up in most of these sports. EDII organizes such events to create sense of harmony among colleges and Equipo served the purpose well. The institute looks forward to organize many such events to connect youths across the state.